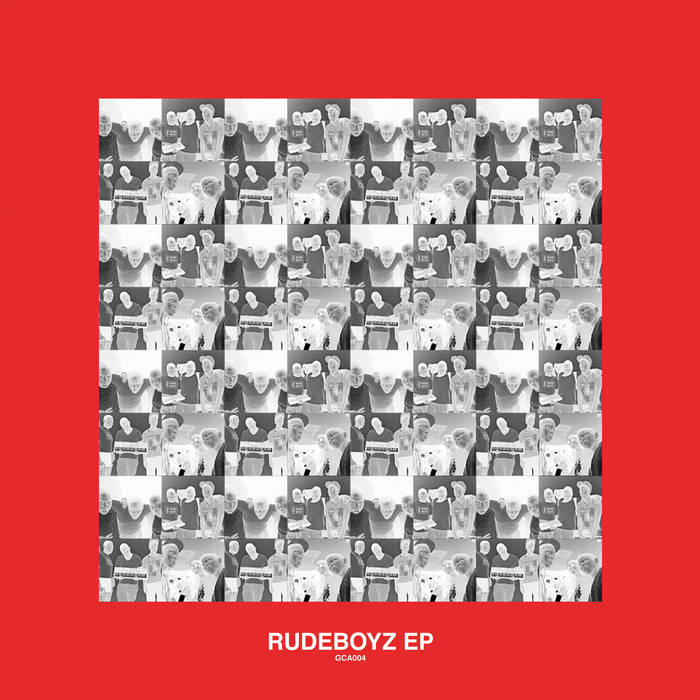 Rudeboyz are Massive Q, Andile-T and Menchess from Durban. They make Gqom (or Gqomu or Igqom); raw, dark and hypnotic South African house music rooted in the townships of Durban, and shared with the world via the internet and social media. Gqom blares out at makeshift clubs, taxis and shopping malls; it is THE music in Durban. Gqom roughly translated from Zulu to ‘Bang’ or ‘Hit’ - It’s uncompromising and stripped back music geared for the dancefloor.

This EP has been a long time coming. Internet in Durban is woeful, which explains why a lot of tunes are at lower bit rates and equally why this release has been so long in the making.

The EP opens with Get Down - the most direct and punishing of the four tracks with a punching synth and unrelenting kicks that do not deviate from their rhythm or their cause.

Mercedes Song and Mitsubishi Song are odes to legendary presses of the pills that fuel the parties that run through the night. They roll for six unsettling minutes a piece - a long ominous drone underpinning the pounding beats. On Mercedes Song TD Snax adds to the unease as he shouts and yelps in Zulu: “Yaze yangibamba weeh yaze yangibamba” - "This Mercedes has got me so high, this is my Mercedes.” Mitsubishi Song, one of the biggest Gqom tracks of 2013, mirrors this unease switching between cascading toms and jolting, stuttering rhythms, cowbells and bird tweets.

Sambuka Dance is an ode to a very different poison and its disorientating arrangement is reminiscent of its effects. A jarring, angry chant harasses incessantly transforming the track into a full body experience.

As Jumping Back Slash eloquently put “Gqom feels like music you’ve been listening to for years”. It is a ghostly cousin of sounds it touches on - brash, abrasive music with no inhibitions.

These four tracks were handpicked from a vast catalogue of tunes from Rudeboyz built up over the last couple years. The Goons urge you to go listen to more of that catalogue: kasimp3.co.za/RudeBoyzSA

Record label and collective from London.

Bandcamp Daily  your guide to the world of Bandcamp

New sounds from Mavi, Ivy Sole & Moderator, plus AJ, the One joins the show, for her latest release